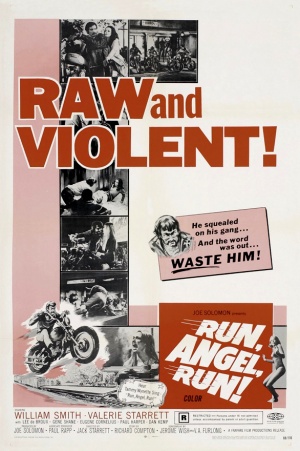 “I want you to call the other gangs. Tell ’em Angel’s headed north on 101”

Run, Angel, Run stars William Smith as Angel, who sells out his gang to Like magazine for $10,000. When the magazine hits the stands with his photo on the cover, the jig is up and every biker in LA is out to get him. He and his old lady Laurie (Valerie Starrett, the director’s wife), a prostitute and go-go dancer, hit the road via chopper and box car train hopping (with the bike of course) to pick up the $10,000 in San Francisco.

“I just don’t know about this straight scene. I don’t know if it’s my bag“

Having run out of money, the couple end up in a run down house in a small town. Angel finds himself as a ranch hand on a sheep farm, but both have trouble adjusting to the square life. They make a good effort at playing house, but bicker about dinner, dishes, and finances constantly.

“You think you got to ride a chopper to be a tough guy.”

Ranch farmer Dan Fenton (Dan Kemp), an ex professional motorcycle racer, becomes a father figure for Angel. Dan’s got a 1917 Harley in the barn that Angel, who’s starting to think the square life ‘aint so bad, fixes up for him and they tear around the country side together. But of course the gang Angel sold out to the tabloids catch up to him when they meet Dan’s daughter at a local teen hangout. She goes for a spin with them, is made proper “mamma” and comes home bloody….all hell breaks loose.

Shot in 13 days for $100,000 (and making $13 million at the box office), the film Stars Hollywood tough guy William Smith (other biker flick credits include Angels die hard, The Losers, C.C. & Co., and Chrome and hot leather), produced by Joe Solomon who also made Hell’s Angels on wheels, and directed by Jack Starrett who appeared as “the fuzz” in many of the 60s biker flicks. Run Angel Run was his directorial debut.

Great site for pictures from the film HERE

Country legend Tammy Wynette sings the title song Run Angel Run and the upbeat soundtrack is by the ever popular Stu Phillips who also did the score for Beyond the valley of the dolls.

Cine Meccanica recently acquired the LP to add to the growing collection of Biker film soundstracks….Enjoy (and please excuse the lame, sideways filming) 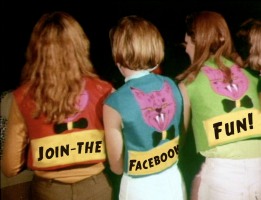